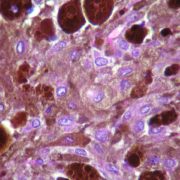 In humans, melanomas are one of the most frequent and aggressive neoplasms and, although the incidence of skin forms has variability depending on the geographic area, uveal and mucocutaneous melanomas have a homogeneous morbidity. Both, in the case of skin melanomas related to UV radiation and in mucocutaneous tumors genetic abnormalities have been identified. Spontaneous melanomas in dogs are a model of their counterparts in the human species based on their inter-individual and intratumoral heterogeneity, metastasis, relapses and resistance to treatment. In this review work, authors carry out a comparative study of cutaneous and mucocutaneous melanomas in humans and dogs, reviewing clinical manifestations, genetic bases and different therapeutic alternatives.

Scroll to top
HISTOVET uses cookies to ensure the proper functioning of our web portal, improving security, to obtain superior efficiency and personalization, to collect statistical data and to show relevant advertising. If you continue browsing or press the button 'ACCEPT ' we will consider that you accept all its use. You can get more information in our COOKIES POLICY in the button 'READ MORE '. Accept Read more
Legal notice & cookies

This website uses cookies to improve your experience while you navigate through the website. Out of these cookies, the cookies that are categorized as necessary are stored on your browser as they are essential for the working of basic functionalities of the website. We also use third-party cookies that help us analyze and understand how you use this website. These cookies will be stored in your browser only with your consent. You also have the option to opt-out of these cookies. But opting out of some of these cookies may have an effect on your browsing experience.
Necessary Always Enabled
Necessary cookies are absolutely essential for the website to function properly. This category only includes cookies that ensures basic functionalities and security features of the website. These cookies do not store any personal information.
Non-necessary
Any cookies that may not be particularly necessary for the website to function and is used specifically to collect user personal data via analytics, ads, other embedded contents are termed as non-necessary cookies. It is mandatory to procure user consent prior to running these cookies on your website.
SAVE & ACCEPT